Things are heating up in the crude tanker market, with VLCCs reaping the benefits so far. In its latest weekly report, shipbroker Charles R. Weber said that “last week’s influx of USG inquiry buoyed rates across the globe on the VLCC sector, as eastbound rates from the region approached year-to-date highs. This increased activity made the ballast option to the Atlantic more attractive, further reducing the over-supply of tonnage in the AG. In line with the rising USG activity, the most recent EIA numbers had crude exports from the USG reaching a record high of 3.607 mil bbls per day for the week ending February 15th. The March program for VLCC cargoes is already outpacing the highs seen in January and February and we are starting to see inquiry for April develop, keeping the pressure on for the moment”. 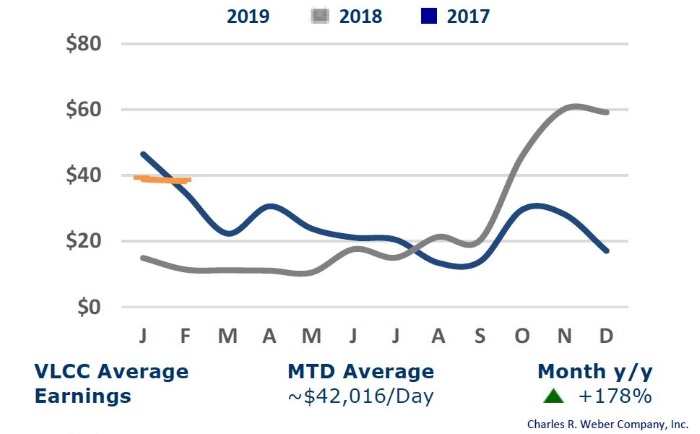 According to CR Weber, “even though there has been an end week pause of fresh inquiry, resistance from Owners persists, on expectations of a busier period ahead; both in the AG and Atlantic sectors. Rates on the AG-CHINA route were up almost fifteen percent from last week, increasing from the low to high ws50’s, the latest fixture at ws57.5; yielding a tce return of about $35,000 pdpr. The returns basis ballasting directly to the USG remains higher ($38,700 pdpr), but the delta is much closer than the $10,000 present a week ago. Rates on the AG-USG adjusted higher in line with the overall market strength, moving closer to the ws30 level. The March program saw Charterers progress through most of the first decade and as eastern tonnage continues to look at greener pastures in the Atlantic, the oversupply of available tonnage reduced from 20 to 15 vessels. This still leaves sufficient supply, but if USG exports continue at the fervent pace from March it will bring the supply-demand equation into greater balance”. 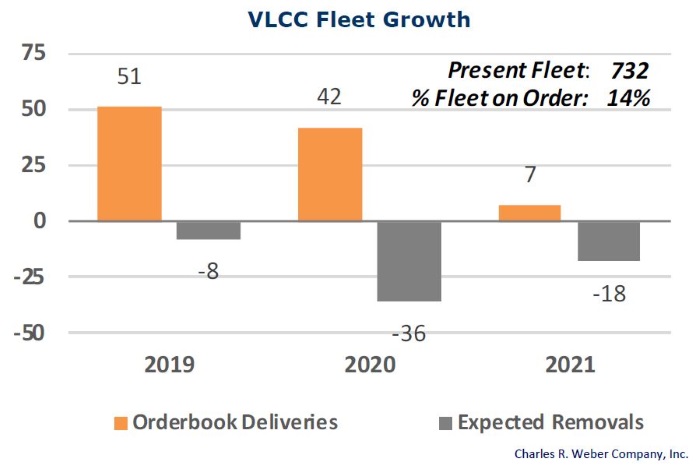 Similarly in the Aframax segment, CR Weber commented that “with a relatively quieter week of enquiry, the US-Gulf/Caribbean Aframax charterers were finally afforded a small amount of breathing space, resulting in being under less duress than in previous weeks. Fog has still been intermittently a nuisance (to Charterers), but not enough to counterbalance the slower pace of cargoes. With exports still dominating the news cycle, and a blasé Mediterranean market, tonnage on the other side of the Atlantic has embraced the ballast in, allowing charterers to significantly reduce the trans-Atlantic rates, which have been at a minimal differential to the Up-coast rates. As we close out the week, and for normal lay/cans, we could confidently call TD9 at around WS 150 levels, and trans-Atlantic at around WS 125-130 levels; with the latter showing more signs of surface cracks. Owners will inevitably hope for a busy Monday, filled with weather disruptions and other helpful factors, but ceteris paribus, it looks like charterers will have the better playing hand”, the shipbroker concluded.