Tanker Owners Could Have a New Market Soon

The market for ship tankers could soon welcome a new member in Guyana. In its latest weekly report, shipbroker Gibson said that “there may be few new frontiers left in the oil market, with most regions having been tested, even if deemed to be uneconomical in the current oil era. However, from next year there will be a new kid on the block – Guyana. Throughout history, Guyana has hardly made it onto the tanker map. Despite sharing a boarder with Venezuela to the north and Brazil to the south, the country has never produced oil on a commercial scale. Even from a demand perspective, the country imports only minimal volumes of refined products and has no domestic refining capacity”. 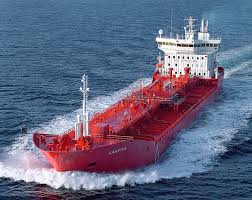 “However, Guyana is now gaining international focus as exploration and production (E&P) activity ramps up. Major companies have joined the E&P efforts in the country, including ExxonMobil, HESS, CNOOC, Tullow, Repsol, Total and Qatar Petroleum, among others. By the end of 2020, oil production capacity is expected to reach 120,000 b/d as the Liza Phase 1 field starts up. Currently the FPSO Liza Destiny is en route to Guyana from Singapore and due to arrive on site later this month. Liza crude will load directly from the Liza Destiny FPSO and will be relatively light and sweet with an API of 32.1 and sulphur content of 0.51%. This FPSO will be followed by another two firm units, when the Liza Phase 2 field (220,000 b/d) and Liza Phase 3 (180,000 b/d) are due to come online in 2022 and 2023 respectively. Another two FPSOs could follow, taking production up to 750,000 b/d by 2025, subject to the final investment decision (FID) being sanctioned”, Gibson noted.

According to the shipbroker, “with a population of just 780,000, the country’s oil production is likely to prove transformative for the country. In 2018 the country’s GDP was estimated at $3.6 billion according to the World Bank, with its stake in the various fields worth potentially $13-15 billion in revenue by 2025. However, it may not all be plain sailing for the country. Given its proximity to Venezuela, Maduro’s regime has launched several bids to claim sovereignty over some of the oil fields and even sent its navy to harass E&P activity, albeit with limited success. The country is also preparing for elections following a vote of no confidence against the incumbent government, whilst many have called for a review of oil contracts after suggestions that the country sold off its oil too cheaply. E&P companies may therefore hold off on another further FID until the political environment becomes clearer”.

Gibson added that “nevertheless, barring any unanticipated delays, tanker owners can expect a new load area to open up from 2020. Whilst the volumes will be small at first, they will gradually increase up to 2025 and perhaps beyond. More importantly, although production of 750,000 b/d still puts the nation well down the list of top oil producing countries, the lack of domestic refining capacity and local demand means that exports wise, the country will make it into the top 20 crude oil exporting countries”. 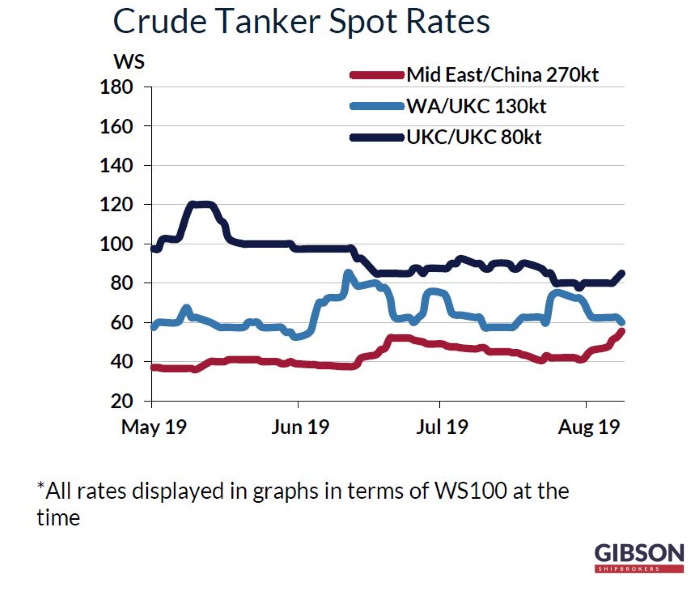 Meanwhile, in the crude tanker market this week, Gibson said that in the Middle East, “VLCCs maintained a brisk early pace that complemented solid Atlantic interest and allowed owners to score new highs that hadn’t been revisited since the Spring. The August programme is entering it’s final phase however, and widespread holidays in the East from late this week will both combine to create a drag anchor to any material further gain over the short term, at least. Currently rates operate at up to ws 55 to the Far East for modern units with runs to the West marked in the mid ws 20s via Cape. Suezmaxes showed little rate variance over a rather flat footed week – 130,000 at around ws 75 to the East and to ws 32.5 to the West currently, and little change forecast though early next week either. Aframaxes kept to a slow bell through the week and just about hung on to an average 80,000 by ws 100 to Singapore with another testing phase to come”.