On 02.11.2017 m/v Hispania Graeca, managed by Angelakos (Hellas) S.A. was awarded the Special Rescue Award at the Amver Awards 2017 ceremony, which was organized by the International Propeller Club.

Mr. Stephanos E. Angelakos, who was representing the company, received the Award from the Rear Admiral Linda L. Fagan of the U.S. Coast Guard.

The award was to honour the Master, Officers and Crew of m/v Hispania Graeca, who rescued four (4) Philippino shipwrecked fishermen off the South coast of Mindanao Island, Philippines, on 24.01.2017, who had been helpless in the sea for four (4) days after their boat had capsized.

Their action is not only an example of saving people at sea, but it also represents the spirit of the crew that Angelakos (Hellas) S.A. have onboard their fleet. 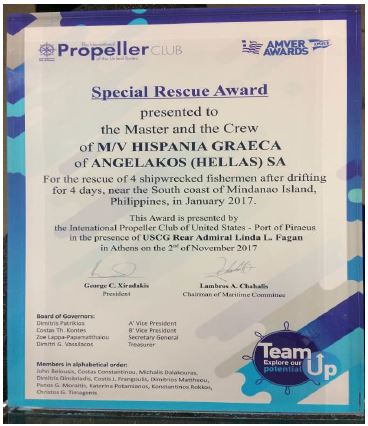