#1 Greece
The Greek fleet has increased its total value by over USD 5 billion in one year. This is the second biggest increase in value for any of the top 10 shipping nations. The total asset value of the Greek owned fleet has topped USD 100 billion, a significant milestone.

The increased fortune comes from growth in LNG ordering and a Tanker value uptick. Greece has moved into pole position as owning the highest valued LNG fleet in the world, up from USD 13 billion at the start of 2018 to USD 18.4 billion. This puts Greek owners ahead of Japan, whose fleet comes in second at USD 15.2 billion.

Their biggest loss comes in from the MODU sector, with George Economou’s drill ship sell off and lower asset values overall which have depressed the net value. 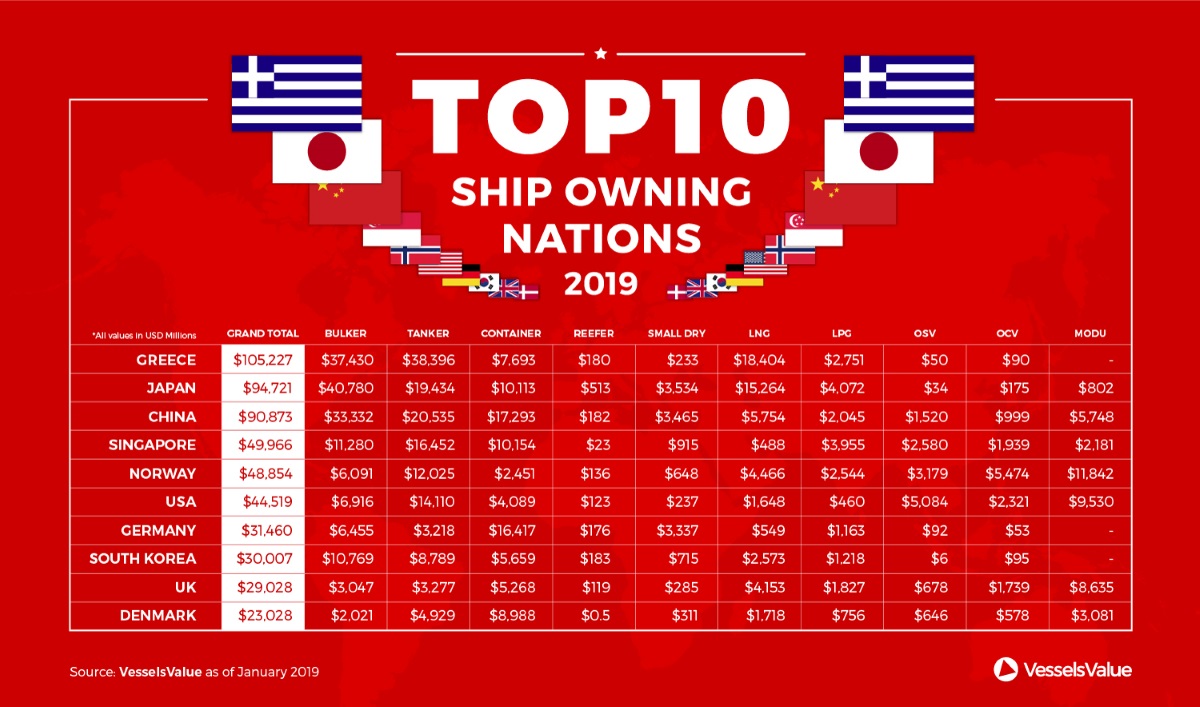 #2 Japan
Japan remains in second place of the top owning countries. The rebound in Bulker values was the largest boost to the end of year fleet valuation, followed by Tankers and LNG carriers. It is interesting to note that Japan based companies saw the largest addition of value from LPG carriers, a segment in which many other nations saw an erosion of value.

#3 China
The Chinese fleet has seen the largest increase in value for any of the top 10 highest valued fleets. An additional USD 6.3 billion has been added, bringing up the total fleet value to just over USD 90 billion. At the same time, they suffered the largest drop in total Container fleet value.

China has been responsible for much of the incremental demand in LNG consumption. It is not surprising to see companies based here see a significant increase in value in this market. Asset values surged in line with spot and term market returns.

COSL leads the way on the Offshore front, owning the fourth highest number of vessels in the world and sixth most valuable. The Chinese government owns the next highest at 52 with a much lower value of USD 332.6 million. Tianjin Offshore owns the second most valuable fleet of USD 1.085 billion.

Continuing the trend from last year, China has increased its standing from third to second for most vessels on order, however in terms of Offshore, the country is in fifth position. This is most likely due to its oversupply hangover after the crash in 2015/16.

#4 Singapore
Singaporean owners have jumped up a spot into fourth place, increasing their fleet value by USD 3.1 billion. They now sit comfortably above the USA and Norway yet are a long way from a podium position. The majority of their increase comes from their Container growth, most notably attracting the Japanese Container liner merger ONE to locate to Singapore.

Ownership of Offshore vessels continues to be spread more evenly across the key regions with a high presence in the Mexican Gulf and West Africa, and a small presence in the North Sea. The highest concentration of these vessels remains in South East Asia and the Middle East.

#5 Norway
Norway maintains pole position as the number one home for Offshore assets. Over USD 20 billion in assets puts it above US based owners, who clock in at almost USD 17 billion. The country maintains a sizeable presence in the Tanker markets as well.

#6 United States of America
US exposure to the offshore markets, which have suffered further asset value declines, has knocked the nation down to sixth place in terms of corporate ownership.

One major contributing factor to their declining asset value is that the country has the highest number of Offshore vessels aged 15 years and older. This percentage of old, potential scrap candidates will have a negative effect on overall asset value.

#8 South Korea
It has been a very positive year for South Korean owners, who have increased their fleet value by over USD 5 billion in the three largest markets of Bulkers, Tankers and Containers. Containership assets comprised over USD 3 billion of the value added. One interesting trend is the decline in LNG asset values held by Korean owners, which is due in part to the removal of some older, steam powered units from service.

#9 United Kingdom
The UK slips down a notch from its 2018 slot to ninth place. The ownership by segment is diverse, and no one flagship market decline is responsible for the drop. There could be some risk aversion ahead of the country’s planned exit from the EU that is driving investment to other locales.

#10 Denmark
The Danish fleet is heavily dependent on the Container markets, but this segment saw little volatility, adding modestly to the net value under the Danish masthead. However, weakness in clean Tanker asset values dragged down the total value of the fleet. The country clings to its top ten ranking though.