Getting the bunkering lead time right is more important than ever 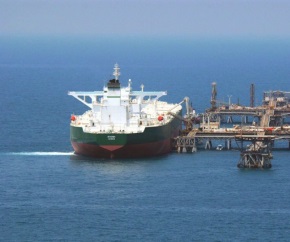 Following the IMO2020 transition, longer lead times have become key to securing bunker fuel while paying a competitive price. Shipowners who delay stemming risk non-availability and having to burn a more expensive compliant fuel instead. Book too early and potentially face cancellation costs or delays.

Comparing the lead time then and now
Lead time used to be somewhat less important prior to the IMO2020 switch, with plentiful HSFO availability globally. In most cases, the ability to stem HSFO as and when required meant that many stems were booked close to delivery. 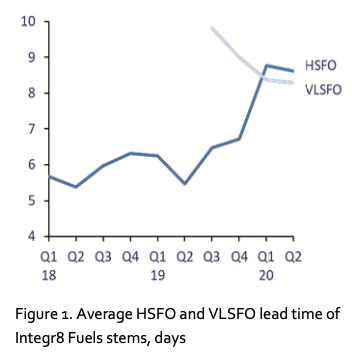 Figure 1 shows the progression of the average lead time for HSFO and VLSFO, which started to increase mid-2019 and has now stabilised at a much higher level of around 8.5 days, up from 5 to 6 days in the previous years. While HSFO is still relatively tight, VLSFO lead time may potentially start to decrease in the current well supplied market. And there is a human element too

Some operators and buyers at times may have potentially faced nonavailability earlier this year so buying strategies were adjusted to accommodate for longer lead times. Some of them would continue to habitually stem early despite the changing market dynamics so the industry may not get back to the shorter lead times seen previously.

With the change in the average lead time, the distribution by the lead time bracket has also changed. Having analysed over 5,000 stems, Figure 2 compares the shares of Integr8 Fuels HSFO and VLSFO stems by lead time in Jan-May 2019 and Jan-May 2020 respectively. 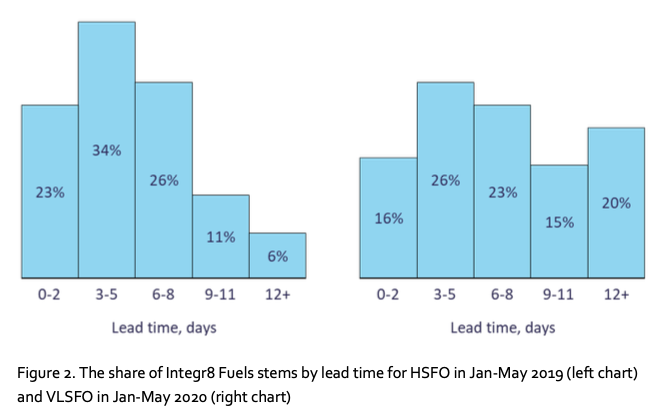 Getting the lead time right
Getting the lead time right is very important. Short lead times risk nonavailability or a relatively expensive price paid. While some may argue long lead times are always beneficial, these are also associated with risks. One of these risks is the change in voyage orders, with vessels trading on the spot being particularly vulnerable. Should the destination port change, where bunkering has already been arranged, the owner risks racking up cancellation fees, unless a change of supply port has been agreed with the supplier where possible or the market moved up since fixing.

The other risk lies in facing unexpected bunkering delays due to congestion or bad weather, particularly for bunker-only calls. Both are very hard to predict over a week ahead and such delays can be very costly. Lastly, the vessel itself may arrive late at the bunkering port causing delays in bunker supply.

With all the benefits and risks in mind, based on the continuous market monitoring and the thousands of stems concluded, Integr8 Fuels currently estimate the optimal lead time on average of at least 6 days where possible for VLSFO and slightly longer for HSFO. Distillate only bookings can generally be concluded with much shorter lead times without any issues.

While the optimal lead time varies by vessel type, port and fuel, continuously monitoring these changes is now more important than ever given the new market realities and the many associated risks that can impact PnL.