The dry bulk market’s recent corrections seem to be helpful for the latest rally to “sink in” and for the restoration of the market’s balance and a rethinking of the prevailing fundamentals. However, according to Allied Shipbroking, the metals’ prices rally seems to indicate that there is still room for more freight rates increases until the end of the year, although charterers are resisting such rises.

In its latest weekly report, shipbroker Allied Shipbroking noted that “it has been a week of corrections for the dry bulk freight market as it seems as the general Baltic Dry Index takes a break from its upward rally course. The course of each individual index seems to have taken a non-typical course since early July, leading many in the market to make claim on attempts of market manipulation by the larger charterers, through the holding back of cargoes every time we reach a peak that is higher than the previous. This sort of trend has been epitomized by the course taken by these indices, with most prominent that of the Panamax index, showing clear “steps” with short periods of corrections in between”. 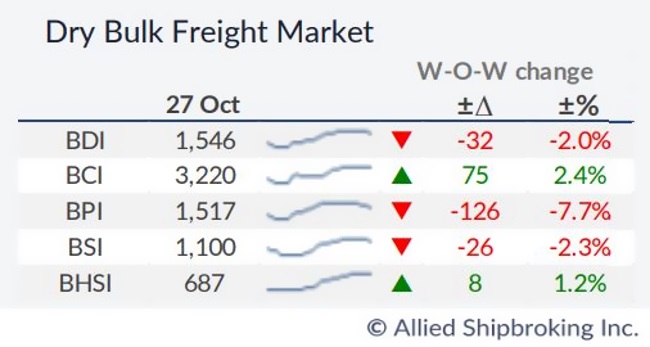 According to Allied’s George Lazaridis, Head of Market Research & Asset Valuations, “this holding back may have occurred to some degree and it will eventually run its course with the market starting to drop at some point (It would be unthinkable to expect that we would be looking at a shipping market on a constant upward curve in perpetuity). Nevertheless, it is important to note that we have already reached a peak level, with rates well above what has been noted in the past 3 years, a sharp contrast to the sort of market we were facing back in 2016. Having said that, we do find ourselves “running with the bulls” so to speak. Most in the Metals markets are showing an over-optimistic face, with the industry eagerly looking at the potential windfall for the market as they head for LME week in London (the annual gathering of the global metals community in London). The metals markets have been showing a very strong face during this past year, with prices having shot up considerably since the bottoming out in 2015 and with key demand centers showing consistently stronger growth figures”.

Lazaridis adds that “China continues to be the key market here, however manufacturing gauges reveal a strong rebound in other key market such as that of the Eurozone and the US. In addition to this we have seen the curbs in China play a role in smoothing out concerns over the tackling of the supply glut that plagued the industry for more than two years now, while the improved overall consumer indices and rising demand from construction and the automotive sectors, have also played a strong role. At the same time further boost have been fed into the market as most continue to show upward revisions in their growth outlook for most of the OECD countries and key emerging markets. As such it is no surprise that there is strong confidence in the market moving forward, while much of this has trickled over to the shipping industry”.

Allied’s analyst noted that “Capesize owners have been the ones most favored by the recent developments in this trade, given their primary focus in the iron ore trade, while many still see plenty of opportunity for the months ahead. That’s not to say that only this size segment is directly benefiting or will be benefiting from this boom in the market. The rest of the segments in the dry bulk market have also seen a rise in activity in cargoes linked to the commodities involved, from a rise in most ore cargoes as well as through the increased activity in steel products, as well as cargoes directly involved with the processing and manufacturing such as coal. So the question now stands as to how well the dry bulk freight market can continue on its path of improvement or will this be the peak level for the final quarter of 2017, with a pause being set until the next seasonal spike in demand at some point in 2018. The truth is that there still is enough reason to support further increases before the end of the year, but at the same time there is still ample resistance being noted from the side of charterers”.