Shipowners active in the dry bulk market are popping champagne bottles early this year, as the “Festive” season seems to have arrived early in the form of a new surge in freight rates. In its latest weekly report, shipbroker Allied Shipbroking noted that “the Baltic Dry Index has showed a fairly bullish face lately, hitting a new high of 1,727 points, a number that we haven’t seen since early 2014. This new peak came just in time to calm fears that the much anticipated firming in the final quarter had come to an early fizzle, after a number of small downward corrections noted in weeks prior. With the Capesize T/C average breaking today the US$ 30,000 per day mark, positive attitude in the market seem to now be in abundance”. 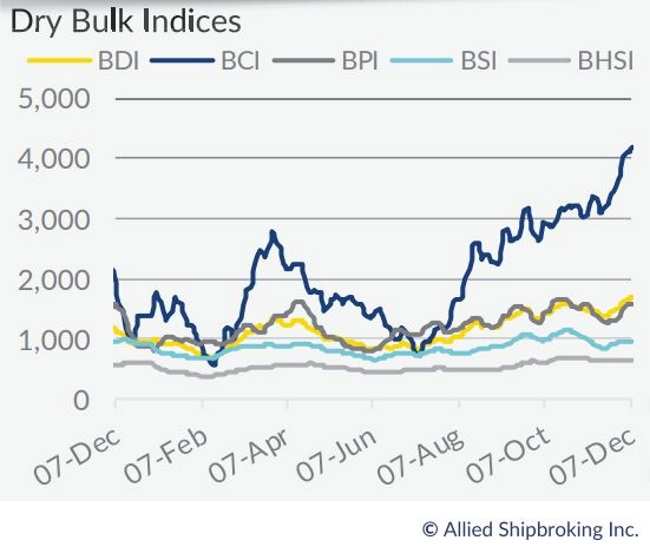 According to Mr. Thomas Chasapis, Research Analyst, “as has been expressed countless times however, given the volatile nature of the shipping industry, an industry highly prone to instability and exaggeration, nothing can be taken for granted. For the time being, the Dry Cargo market as whole is in a healthier state, however some of its main commodities still face considerable risks. China’s coal import growth took a fair beating this year, where the roughly 23% rise noted back in 2016 dropped to less than half that during the course of this year. This has been contradicting to the fact that there was an unexpected uptick this year in China’s economic growth, while at the same time we are still seeing coal import volumes that are below the 2013 and 2014 peak levels. Given that China is the biggest coal importer, accounting for give or take 18% of the total, the sharp downward trajectory note back in 2015 played a major part in the overall deterioration of the dry bulk market”.

Chasapis added that “the recent trend in China towards ever more reliance on natural gas for its energy needs coupled with the closure of several mines and steel mills this year is a fair indication of the government’s commitment to meet its air pollution target. At the same time, with domestic production struggling and under threat by the government imposed closures, buyers have turned more and more their attention towards the higher quality imports. On the other hand, given the recent news of gas shortages during the start of the winter period, coupled with custom’s data indicating a 22 million tons, 3.6% up from October, rise in coal shipments for November, has shown that demand is still there and can still drive the market”.

Meanwhile, Allied’s analyst also notes that “when looking at the global picture, things take a slightly different shape. Overall seaborne trade has experienced a much more robust growth figure this year, despite the lag noted in China’s imports. With countries such as S. Korea noting a sharp rise in their import volumes, this has prop up the overall trade figure. The long term prospects don’t look as rosy however. The biggest importers are the ones showing the most anemic growth levels in imports, while major emerging economies such as India, who would have once been perceived as the market champions, are also looking to scale back their coal dependency and turn their attention to cleaner energy sources. All-in-all, with the switch away from coal becoming ever more cost efficient, and renewables becoming more competitive, the long term outlook of coal consumption is in the doldrums, which will have a significant effect on the seaborne trade of the third largest dry bulk commodity. In the short term, the air pollution targets in China have positively affected coal imports, how long this positive trend will be able to continue, fighting an overall global aversion from this dirty energy commodity, we will have to wait and see”, he concluded.