For all of China’s efforts to lower its dependance on coal as a primary energy source, the country remains a major factor for seaborne coal demand. In a recent weekly note, shipbroker Banchero Costa said that “China’s coal imports raced ahead in 2019, surprising many who had expected that in the months of 2019 to come the government would clamp down strictly on shipments. With economic growth at its weakest in decades in the midst of a trade war with the US, import curbs have been loosened on the nation’s most consumed fuel to help mitigate the pain of an economic slowdown. China routinely restricts imports of coal to help domestic miners through a wider effort to reduce the fuel dependency of the country. For a nation that consumes and produces half of the world’s coal, the strength of China’s import curbs may vary based on the competing priorities of the government to protect domestic miners and power plants”. 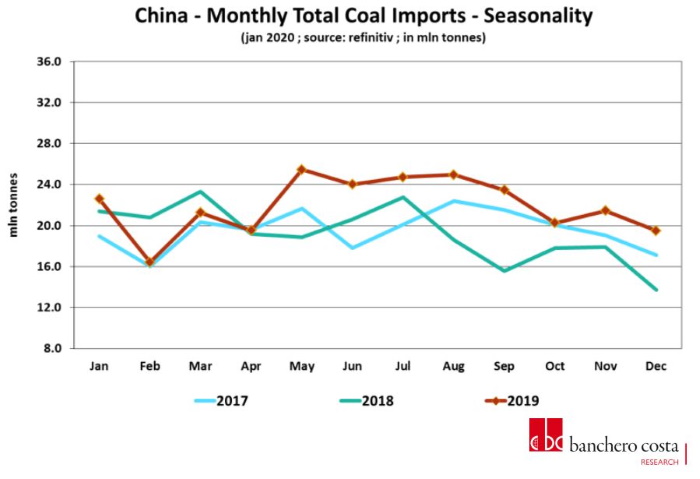 According to Banchero Costa, “while China’s policy priorities will be to reduce air pollution and CO2 emissions, coal is expected to continue to play a key role in maintaining economic growth and ensuring energy security. In the first 12 months of 2019, total coal (consisting of thermal and metallurgical) imports to China increased by an unexpectedly strong 14.3 percent to 263.5 mln tonnes, according to the Refinitiv vessel-tracking data. Indonesia has been the main beneficiary in 2019 increase in demand for coal. In the 12 months of 2019, China imported 124.4 mln tonnes of coal from the South-East Asian nation, up 15.1 percent from the 108.1 mln tonnes in the same period last year. Imports from Australia have also increased, despite the widely reported Customs clearance difficulties and port restrictions at the start of the year”.

Similarly, “Australia exported 89.7 mln tonnes of coal to China in 2019, up 6.6 percent year-on-year. Politics, however, most likely played a role in restricting shipments from the USA. US coal shipments to China were down in the 12 months of 2019 at 3.2 mln tonnes, down from 3.6 mln tonnes in the same period last year. Elsewhere, volumes from Russia have continued to grow as more export capacity has become available, especially on small vessels from Russia’s Far East ports – total seaborne volumes to China increased by 30.9 percent year-onyear to 24.6 mln tonnes”, Banchero Costa said. 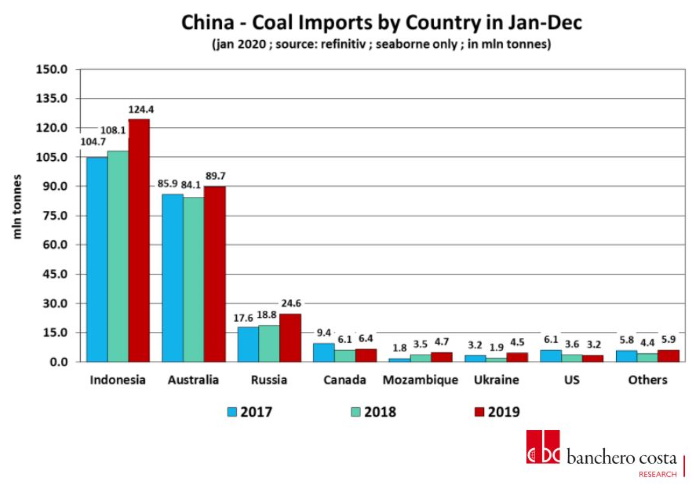 It added that “exports from Ukraine to China also surged, by a massive 133 percent, to 4.5 mln tonnes in the year of 2019. Imports from Canada gain by 6.1 percent year-on-year to 6.4 mln tonnes, from 6.1 mln tonnes in the same period last year. Finally, coal volumes from Mozambique to China continue to grow, by 33.2 percent in 2019 to 4.7 mln tonnes, whilst shipments from South Africa decreased by 19.2 percent to just 1.0 mln tonnes. An increasing shift towards Indonesian and Russian supply, and away from Australia, naturally favours the use of smaller vessels for transportation. In the 12 months of 2019, only 47.7 mln tonnes of China’s total 263.5 mln tonnes of seaborne coal imports were carried on Capesize (120+ dwt) vessels, whilst 78.75 mln tonnes were carried on Panamaxes (65-85k dwt), 109.97 mln tonnes on Supramaxes (40-65k dwt), and 18.43 mln tonnes on Handies (20- 40k dwt)”, the shipbroker concluded.