China imported a record 112.7 million tonnes of iron ore in July, just shy of 10m tonnes above the previous record. July thereby marked the fourth month in a row that iron ore imports exceeded the corresponding month the year before. In the first seven months of the year, iron ore imports are up 11.8%, or an additional 69.5m tonnes, which is the equivalent of 300 extra Very Large Ore Carrier loads (230,000 tonnes).

“The reversal of previous years’ trend to use scrap metal instead of imported iron ore is puzzling and the growth in steel production doesn’t explain the higher imports. Are they simply stockpiling while tensions with Australia grow?” asks Peter Sand, BIMCO’s Chief Shipping Analyst. 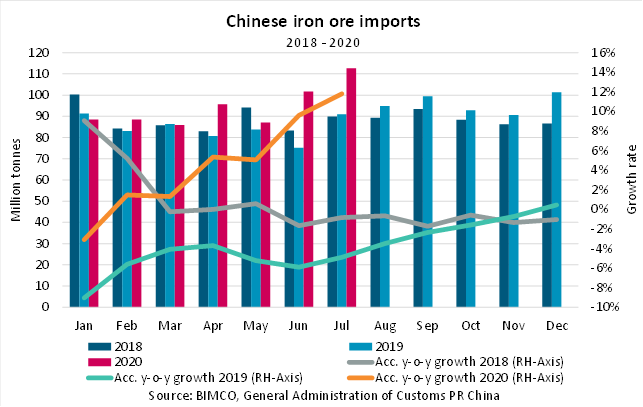 The record-breaking iron ore imports go against expectations given the slowdown of the Chinese economy as a result of the Covid-19 pandemic. Steel production in China, for which iron ore is a primary ingredient, is up by 1.4% in the first six months of the year. After two years in which the growth in steel production has been far higher than that in iron ore imports, the reversal which we have seen so far this year is puzzling.

The increased iron ore imports without a corresponding increase in steel production is likely driven by several factors, including supply disruptions to domestic scrap steel, limiting the use of electric arc furnaces and therefore increasing the share of steel being produced with domestic iron ore.