With Chinese LNG imports growing by a CAGR of 31% p.a. over the last ten years, China has stepped increasingly into the spotlight in the global LNG market. In 2017, Chinese imports of LNG increased robustly by 46% y-o-y to reach 38mt, accounting for 13% of global LNG imports, compared to a 2% share in 2008. China also overtook South Korea last year to become the world’s second largest LNG importer.

Support Act
China’s imports of natural gas via pipeline or as LNG play an important role in China’s energy sector, accounting for c.40% of domestic natural gas consumption in 2017. China’s natural gas imports via pipeline began in 2010 following the start-up of Lines A and B of the Central Asia-China Pipeline, and grew firmly in subsequently years. The Myanmar-China pipeline started up in 2015, and between 2013 and 2016, China’s pipeline imports exceeded the volume of LNG imports. 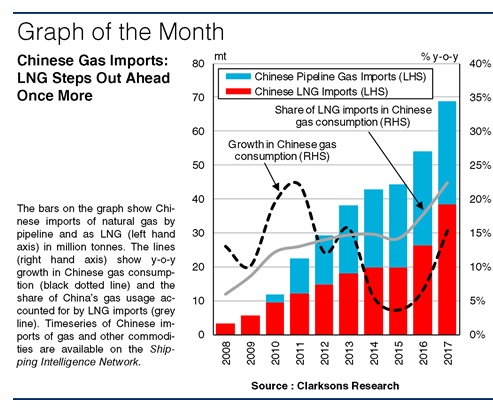 Taking A Lead Role
However, after remaining steady in 2015, Chinese LNG imports started to pick up firmly again in 2016, rising by 33% to 26mt, supported by low LNG prices and faster growth in gas demand. Then, in 2017, many Northern Chinese cities implemented plans to improve air quality by switching from coal to gas boilers, contributing to strong growth of 15% (23mt) in domestic gas demand, and leading to a gas shortage in some areas during the winter. Meanwhile, domestic gas output only rose by 8mt to 106mt, and natural gas imports via pipeline rose by just 2mt.

Backstage Help
Looking ahead, there seem to be a number of positive drivers of China’s LNG imports. While a new gas pipeline from Russia is under construction (the ‘Power of Siberia’ pipeline), it is not expected to be operational until late 2019, which should support LNG imports in the short-term given the fast growth in gas demand, limited domestic output and lack of flexibility of pipeline supply contracts. While there is also some potential for increased domestic shale gas output, the expected rapid expansion of global LNG supply and construction of new regasification terminals in China also provide positive signals for LNG imports. At the start of 2018, China’s LNG regasification capacity stood at 54mtpa, and could reach around 80mtpa by the end of 2021.

So, China’s LNG imports had an impressive 2017. With strong growth in gas demand, driven partly by a greater focus on environmental issues in general, there seems to be clear potential for further expansion in LNG imports. Overall, China looks likely to remain in the spotlight in the LNG sector for some time yet.