The first half of 2019 saw 201 cargo vessels sold for demolition (sum 2 million tonnes) 75% were scrapped at either Bangladesh or India, with Bangladesh receiving the majority share. Scrapping numbers were down c.18% compared to the first half of 2018. This is a knock on effect from the collapse of the Brumadinho dam in January, which has affected cargo supply and therefore charter rates.

Demolition rates peaked later into the first half of this year, compared to last year, as tonnage supply became more scarce and yard availability and appetite grew. H1 of 2018 saw rates peak during mid March at 470/465 ($ per LDT) for tankers and bulkers respectively. H1 2019 saw a lower and later peak of 465/460 ($ per LDT) towards the end of April.

Cargo
The below graph shows a breakdown of the number of Cargo vessels, by type, scrapped in first half of 2019 and 2018 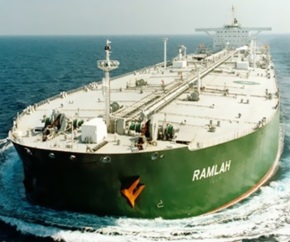 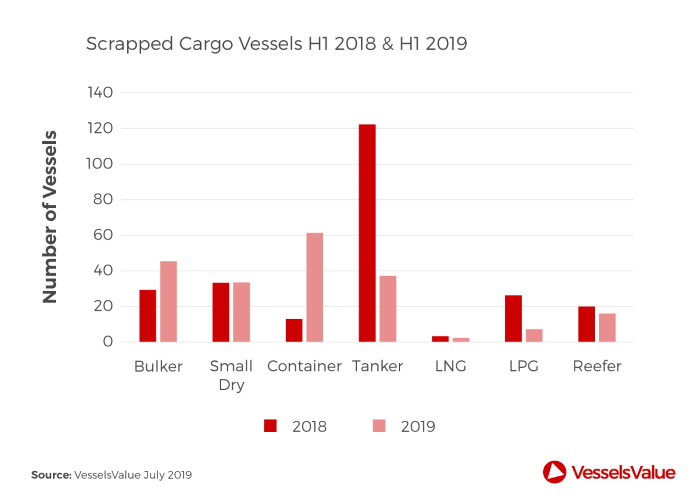 Bulker Demolition activity in the bulker sector has increased c.55% compared to the first half of 2018.

Small Dry The small dry sector was the only sector to remain consistent in terms of the number of vessels scrapped, in comparison to last year.

LNG The positive outlook on the gas sector continues to see little scrappage. Only two LNGs were scrapped in the first half of 2019, both for delivery in Bangladesh. 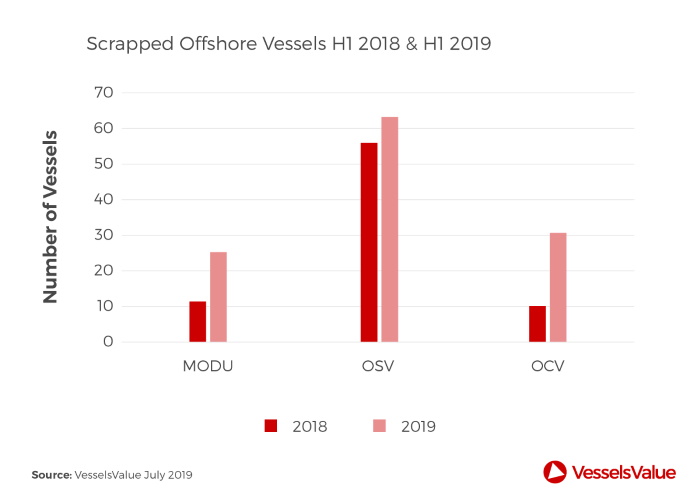 MODU an increase in rig count and a sustained higher oil price has resulted in less scrapping. The number of MODUs sold for demolition at the start of this year has decreased by a half compared the first half of 2018.

Conclusion
As Bangladesh continues to clear its beaches and rates remain relatively stable for the foreseeable future, scrapping may have a quiet start to Q3.